Bridge Мaking Is Her Trade, Humor Her Aide 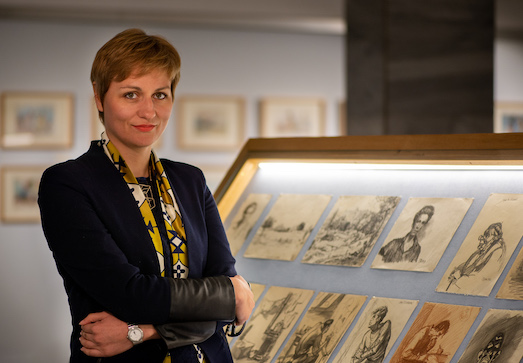 Not bridges of the kind that require feats of engineering, but those that call for vision, humanity, sincerity, and a taste for the visual. She is an art curator who builds bridges between people and the most humanizing of human activities—art.

As manager of Transitland, the largest archive of video art from Central and Eastern Europe from 1989–2009, she helped build links between and tell the stories of transition of ordinary people. Her stewardship of the European Media Artists in Residence Exchange (EMARE) and of a resident center for artists in Sofia encouraged networking and cultural exchange among European artists.

Three years ago, she took the helm of the House of Humour and Satire Museum in Gabrovo, a monument to the most unifying human experience—humor. The House organizes one of the more significant cultural events in Bulgaria, the Gabrovo Biennial of Humour and Satire, once conceived as a bridge between East and West. Held every other year since 1973, the Biennial has exhibited works by artists from all over the world for 46 years, showcasing the best achievements of humor and satire in Bulgarian and world art.

Under Margarita’s leadership, the space around the museum has also come to resemble a bridge, serving as a link between Gabrovo residents and the art collections inside. It is becoming an attractive area for rest and recreation, and locals enjoy cinema screenings and outdoor museum events every summer and fall. As ever more people spend time in the vicinity of the museum, many venture a peek inside eventually. And if Margarita’s bridges don’t bring people over to the other “shore,” she reaches out to them, taking the exhibits out on the squares and streets.

“I want people to need to visit museums. I want art to be in the news, in people’s conversations. I want it to move them.” But for that to happen, “everything should be done in the most accessible way possible; art should not be elitist,” Margarita says. She believes that museums should make people feel at ease; they shouldn’t scare them away with complicated words and messages. Hence the golden rule at the House is: don’t tell people what to think or how to feel. “The great pleasure of communicating with art is in forming your own opinion, in discovering how it makes you feel,” she says.

Margarita’s thinking about art was shaped by her time at the Royal College of Art in London, one of the world’s most prestigious graduate institutions for art and design. There she obtained a master’s degree in contemporary art curation under the mentorship of leading museum and gallery curators. She also holds a bachelor’s degree in cultural studies from Sofia University and has vast experience in working with contemporary art.

She was drawn to the House’s intriguing history and the challenge to transform it into a 21st-century institution. “It’s much more interesting to work in a place where things can be changed,” says Margarita. She defies the notion that only the world’s cultural centers and capitals can have a lively art scene. “Gabrovo is the city with the most exciting history in Bulgaria, and the House of Humour and Satire is one of the most interesting and significant cultural institutions in the country,” she says. Its founders had great ambition and an even bolder vision. “The first director of the museum, Stefan Furtunov, stopped at nothing,” she says. When American writer Kurt Vonnegut failed to show up in Gabrovo to receive the literary prize conferred on him by the House, Mr. Furtunov traveled to the United States to give him the award in person.

Margarita’s vision is no less ambitious. In the past two years, the House has organized 55 exhibitions and 157 events—movie screenings and discussions, book presentations, theater productions, seminars, and children’s workshops—and seen a significant increase in visits. Some of the first exhibitions at the House curated by Margarita were dedicated to the projects of internationally acclaimed artists Christo and Jean-Claude and the life of Christo’s family in Gabrovo. Another exhibition presented the work of Bulgarian caricaturist Todor Tsonev.

Today, many of the museum’s exhibitions are interactive: visitors can try their hand at drawing caricatures of one another or creating a clay sculpture “with a personality” in the style of Todor Tsonev. “It gets interesting when you ask the audience to do art,” Margarita says. These activities are popular with children and adults alike. Margarita tells a funny story about an IT company whose employees visited the sculpture studio and competed to create the face of the “ideal developer.” 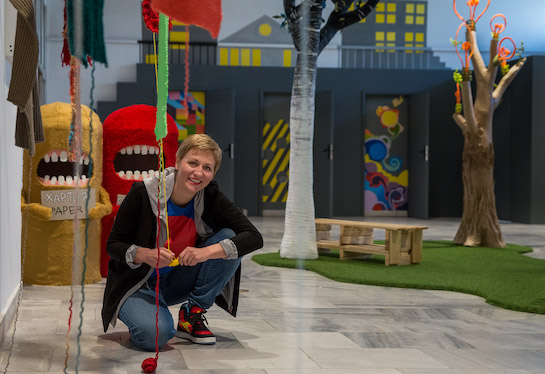 Communication with the local audience is one of Margarita’s main goals. In addition to featuring local artists such as Kiril Stanoev and others, many of the exhibitions and events organized by the museum seek to engage locals in a discussion about what their future should look like and how they should treat the city’s shared spaces. An example is “Garden City,” a children’s exhibition by local artist Nevena Еkimova, developed with support from the America for Bulgaria Foundation. Apart from provoking children’s interest in urban aesthetics, through fun activities “Garden City” teaches them how to be good citizens and take care of public spaces such as by recycling or cleaning up after themselves.

Public spaces are the theme of the 24th Gabrovo Biennial, taking place from May 17 to September 30, 2019. More than 640 authors and artists from 69 countries submitted artworks on the topic of “Dimensions of Publicness” for the Biennial’s competition. Of these, the international jury selected 182 works by 150 artists. The winning works will be announced on May 17 and will be exhibited at the House. The Biennial program also includes a joke- and storytelling competition, a piano performance, art exhibits, a discussion on media literacy, and much more. Apart from the Biennial opening, the third week of May will be packed with events related to the annual Gabrovo Carnival, culminating in the traditional carnival parade on Saturday, May 18.

In September, Margarita’s virtual bridge will extend all the way to Buzludzha Peak, where German theater troupe Ligna will stage a “radio ballet intervention” at the site of Bulgaria’s “Flying Saucer,” the now-decrepit Monument House of the Bulgarian Communist Party.

The 24th Gabrovo Biennale is organized by the House of Humour and Satire, the Municipality of Gabrovo, and the Ministry of Culture in partnership with ABF, the Cervantes Institute – Sofia and the Italian Cultural Institute.

Note to Gabrovo-bound readers: The Biennial and carnival events are attended by thousands of Bulgarians and international visitors. So, although hotels in Gabrovo have been sold out for months, you might still find accommodation in nearby towns. And the Devetaki Plateau is just a 40-mile drive away, so don’t miss out! 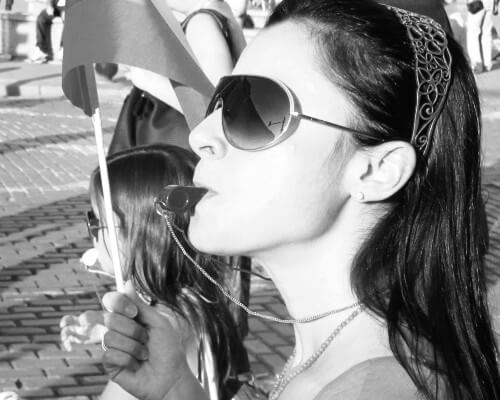 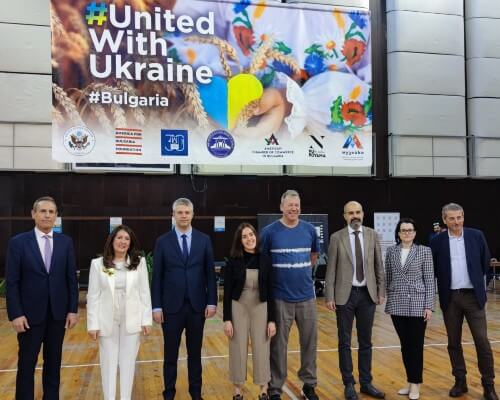