After lying buried for nearly fourteen centuries, the Bishop’s Basilica of Philippopolis and its mosaics will once again become an integral part of the life of Bulgaria’s second city. Plovdiv visitors can see the nearly 20,000 square feet of mosaics on two levels at the Basilica’s Visitor Center, whose soft opening took place on Thursday, September 26, 2019, in Plovdiv.
More than 200 people attended the preview opening, among them Plovdiv Mayor Ivan Totev, representatives of Plovdiv Municipality and the Plovdiv 2019 Foundation, members of the board of directors and team of the America for Bulgaria Foundation, guests from the US Embassy and the US Agency for International Development, foreign ambassadors, archaeologists, mosaic restorers, architects, donors, journalists, and partners. TV journalist Boyko Vassilev emceed the event.

Attendees viewed the restored mosaics and even toured the original Basilica with the help of VR technology. They also observed a minute of silence in memory of Plovdiv citizens whose remains were found in the medieval necropolis built on the Basilica site. Their remains were reinterred in 2019 after careful study. The ceremony ended with an unveiling of the Wall of Tolerance, featuring messages of unity and understanding by foreign ambassadors as well as Bulgarian national hero Vasil Levski’s charge to future generations: “Brotherhood with everyone regardless of faith and nationality.”

“I am extremely happy today—a day we have dreamed of for five years. This is the largest public-private initiative in Plovdiv and one of the biggest in Bulgaria. Thanks to everyone who volunteered their time, adopted a bird, or are helping us care for the mosaics,” Mayor Totev said.

“We, at the America for Bulgaria Foundation, undertook this project because we understand that, by preserving and developing Bulgaria’s archaeological sites, we are also building the country’s tourism industry and supporting broad-based economic growth,” ABF Board Chairman Chris J. Matlon said. “We thank the involvement of the hundreds of volunteers and the contribution of business such as EVN, an Austrian utility, which is funding the creation of a children’s playground at the Basilica site. Plovdiv businesses are donating to the Friends of the Basilica Foundation to ensure it becomes a lively part of the community.”

ABF Executive Director Desislava Taliokova concluded the ceremony by saying: “Three words were spoken most frequently today: partnership, together, hand in hand. The reconstruction of the Bishop’s Basilica taught us at ABF, as well as all of you, I hope, a valuable lesson—that we are succeeding because the energy of scholars and artists met the political will of the government and local authorities, the innovation and entrepreneurial might of business, the resolute support and dedication of donors and volunteers, and the objective and compelling narrative of the media. Only through constructive interaction among all involved are big, successful solutions possible.”

The Bishop’s Basilica of Philippopolis is the largest early Christian basilica found in Bulgaria. It was likely built at the end of the 4th or the beginning of the 5th century, shortly after Christianity was legalized in the Roman Empire. The first mosaic layer dates back to this period, with the second layer laid in the 5th century. In addition to the mosaics, a large stone inscription from the 3rd century was discovered, answering important questions about the pre-Christian history of the site.

The remains of the Bishop’s Basilica were discovered by accident during construction work in the 1980s. Due to a lack of funds, however, the Basilica was not fully uncovered and studied until the 2010s, when the America for Bulgaria Foundation threw its support behind the project. ABF’s total investment in the Bishop’s Basilica is worth 13 million Bulgarian levs. 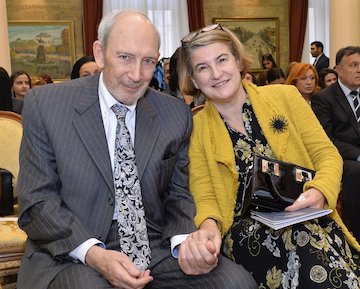